Natural Science Museum is among the five largest Russian geological-mineralogical museums and has on display one of the largest biological dioramas country.

The first collections of minerals and rocks of the reserve were established in 1925 year. AT 1936 , the first wooden building of the museum was built, and with 1990 the museum is housed in three-storey building, where the total area of ​​six halls 2050 quarter. m. Museum fund has about 30thousand storage units, exposed9 thousand exhibits. The museum is a major regional center of education in the natural sciences, annually taking 50 thousand visitors.

Is mineral samples from the deposits of our country and from abroad. The exhibition includes a collection: New Arrivals, quartz, its varieties and the use, precious stones.
Depending on the physico-chemical and geological conditions produced different types of fields and their associated mineral assemblages. The exhibition halls are presented as characteristic minerals deposits, so minor and infrequent. Collecting samples greisens, skarns and rodingites. Minerals hydrothermal antimony and mercury deposits and lived alpine. Charoit Murunsky alkali array, the only mine in the world. The hall is well represented Mineralogy of pegmatites Jewel Mine Murzinka and Vatihi, YU. Urals, Kazakhstan and Trans, as well as a collector's emerald deposits Malyshevskoe (cf.. Ural). Variegated jasper Yu. Urals and metalliferous sediments, who were their progenitors in the long history of education. Bizarre stalactites and calcite corallites karst caves. The bright color of the oxidation zone of sulfide minerals of copper and sulfur deposits of celestine. Collecting samples of salt deposits. 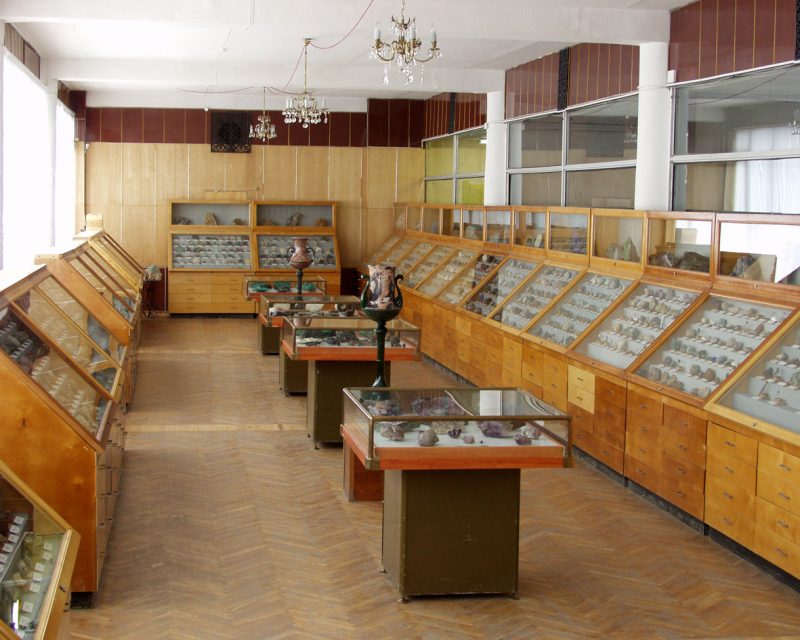 Hall of systematic collection of minerals

Represents 740 mineral species, which are located in the windows of the crystal according to the classification of minerals A. BUT. Godovikova. The hall is decorated with two vases: "Ural Rhapsody" and "Lira" (jasper, jade "Uralkvartssamotsvety", g. Yekaterinburg).

The systematic collection of minerals 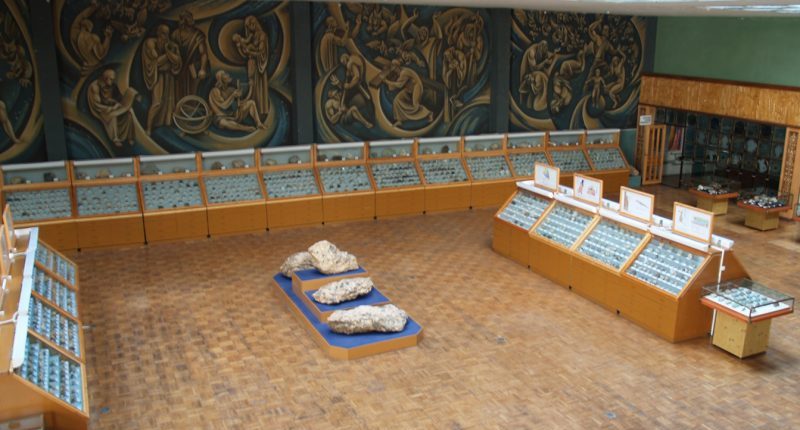 The systematic collection of minerals

Mineral species are represented according to the general classification of the crystal, based on the chemical composition and the crystal structure of the mineral.

In biological hall of the museum reflects the different landscapes of the Chelyabinsk region and the Ilmen Reserve, the richness of flora and fauna.
Ilmen Reserve is located in the transitional zone of the mountain forest-steppe of the Urals to the Trans-Urals. In its territory, Covering an area of 303 quarter. km, there are coniferous taiga forests and fragments of forb-grass steppe, northern sphagnum bogs and shrubland. A mountain, dissected by numerous ravines relief, Nine rivers and nearly three dozen lakes created in each area its own microclimate, a special environment for plant and animal life.
On the territory of the reserve account for more 1250 species vascular plants, 483 alga, about 140 mosses and more 500 species of fungi. The animal world has 57 species of mammals, 173 - birds, 19 species, 6 - reptiles and 5 amphibians. 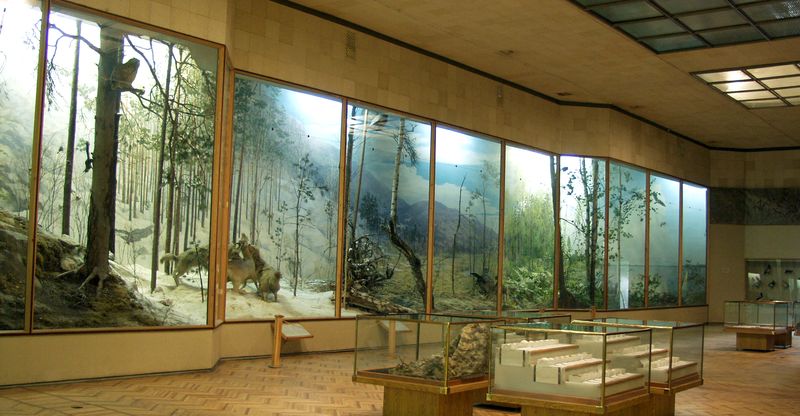 The central part of the hall occupies the bulk of the Biological diorama of "Seasons", one of the largest biological dioramas in Russia.
The diorama represents the transverse profile of the Ilmen reserve from west to east from the gold valley Miass River through the highest point of Mount Ilmen-Tau (747 meters above sea level) to the shores of the lake reserve large Miassovo. Abrupt slope western Ilmen ridge represented mountain-taiga landscape and its characteristic flora and fauna. The diorama exhibits several different biogroups, shown in different seasons in their typical habitat landscapes Ilmen Reserve.
In small windows around the perimeter of the room presents the main natural Chelyabinsk region mountainous zone of tundra and dark taiga, through pine and birch forests to the forest-steppe and steppe landscapes with salt lakes. Each diorama shows characteristic for the area of ​​animal groups.

The attack of wolves for deer (winter)

Perennial dates the onset of winter (mean temperatures below the transition -5 °C) usually coincide with calendar date 1 December. By this time flies and larch needles, usually, there is a stable snowpack.
Winter came, snowy forest empty and silent. Many animals sleep in burrows, most birds fly away to warmer climes. This is the most difficult period in the life of animals. The high altitude snow impedes movement of ungulates. They are quite difficult to get out of the snow herbaceous plants, so they go to food twig food.
During this period, the wolves often come together in flocks, sometimes numbering up 6-10 individuals. In this case, the hunting group becomes more fortunate.

The beginning of autumn is the date of stable transition of average daily temperatures below +10 °C. The Ilmen Reserve, for long-term observations, it happens in the middle 13 September. By this time the leaves turn yellow birch, bramble berries ripen, cranberries, hawthorn, rosehip, mountain ash and viburnum, later begins leaf birch.
By the autumn grows seed in the common fox. Although foxes are large enough, parents continue to feed them. Foxes eat birds, hares, lizards, large beetles, grasshoppers, snails. They often occupy burrows of other animals, especially prefer to settle in old dwellings badgers.
hedgehog, who happened to be near the home of foxes, unlikely to become their prey, so well it is protected spikes. We urchins your worries. Since the winter hedgehogs hibernate, for the autumn they need to accumulate sufficient fat reserves.
closer to 15 September has marked the first autumn frosts, starts yellowing larch needles.

The first signs of the appearance of the spring associated with the first thaw, This usually occurs in early March (Average long-term data 3.03). However, the real spring begins, when average daily temperatures are higher 0 ° C in the beginning of April.
At this time there is flowering goat willow, reveals the kidneys of wild cherry, blooming mother-and-stepmother.
Usually the active capercailyes begins in early April. The specific location is still in the dark going up to a dozen males, which announce the vicinity original song. Tokovanie reaches maximum intensity at dawn. Often, young cocks inflamed even arrange a fight between. Females begin to fly in the current somewhat later, in the middle of April.
At this time, blooms lungwort, sleep-grass, Adonis, pervotsvet, kalwjnïca Bolotnaya. Larch begins greening, rowan, rosehip, aspen.
Capercailyes continues until the foliage on birches and ends, usually, in the middle.

Beavers near the lodge (summer)

Moving average daily temperatures above +15 ° C marks the beginning of summer (Average long-term data 9 June).
During this period blooms cranberries, briar, viburnum. In mid-summer ripening blueberries and strawberries, linden blossoms.
Usually, beavers build a dam to block the river and raise the water level. When the pond will accumulate a lot of water, they build houses, cottages, very similar to small islands. They beavers are safe, as the entrance to the hut is located under water. Beaver feed exclusively on plant food. Summer value increases forage. Leads primarily nocturnal. However, in the late summer and fall, when fodder, comes out and day. Powerful incisors the beaver gnaws trees (aspen, sallow) diameter up to 80 cm and cuts them into pieces of different lengths. these logs, and swirls, he floated on the water to its housing, using them as building material, and the bark and branches eats.
The body length reaches beaver 100 cm, mass of an adult animal - 25 kg.

Computerized lecture hall in the Museum of the Ilmen Reserve started to be created in 1996 year. Financial support for its creation have: Chelyabinsk Region Administration, Institute of “open Society” (Soros Foundation, Grant № A1G702). The allocated their funds purchased and installed in the hall of computer equipment for the organization of graphic stations and jobs, designed to create computer lectures, as well as the projection equipment and digital camera.

The lecture hall is designed to improve the scientific and educational work in the museum, organization of visits to nature reserves in virtual tours and exposure modes, training sessions with students and schoolchildren, environmental, historical and natural history topics.

Flora and fauna of the Reserve
Museum of History

Natural Science Museum is the fifth largest geological-mineralogical museums in the country.
AT 1925 DI, the director of the reserve. Rudenko began to create the first collection of minerals and rocks
WITH 1931 , the minerals and rocks exposed in Miass regional museum and showcases, located on the verandahs of houses some of the staff reserve.
AT 1936 , the first wooden building of the museum was built. TO 1940 year in the museum there were about 4,5 thousand. exhibits. Of them – 4345 mineral samples, rest – biological.
Fire 1 February 1941 , the destroyed building of the museum with collections. During the war (with 1941 by 1944 city) building rebuilt on the foundations of the former, and restored collection.
For the visitors the museum opened 18 June 1944 of the year. The three rooms with exposure area 300 quarter. m housed 1,5 thousand. exhibits. On the first floor samples of minerals and rocks were exposed, on the second – zoological collection. The museum building was not heated, so visitors are accepted only in the summer (about 30 thousand. visitors per year).
The museum received visitors to 1982 of the year. Today, in an old building located research labs and grinding workshops.
The present stage in the life of the museum began in 1984 year, when the new three-storey building finished construction with a total exhibition area 2050 quarter. m.

On the 100th anniversary of the Ilmen Reserve